Here’s another article found at Ancestry.com in Alabama, Surname Files Expanded, 1702–1981 regarding the wedding anniversary of John Henry Scott and Sarah Brown. This time it’s their sixty-fifth. A little math tells us this article was originally published circa 1932, newspaper unknown. This article contains a number of errors which I’ll cover in the notes. 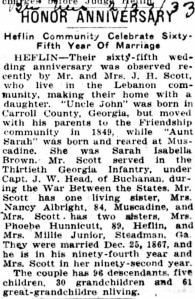 HEFLIN–Their sixty-fifth wedding anniversary was observed recently by Mr. and Mrs. J. H. Scott, who live in the Lebanon community, making their home with a daughter[1]. “Uncle John” was born in Carroll County, Georgia, but moved with his parents to the Friendship community in 1849, while “Aunt Sarah” was born and reared at Muscadine. She was Sarah Isabella Brown. Mr. Scott served in the Thirtieth Georgia Infantry[2], under Capt. J. W. Head, of Buchanan, during the War Between the States. Mr. Scott has one living sister, Mrs. Nancy Albright[3], 84, Muscadine, and Mrs. Scott has two sisters, Mrs. Phoebe Hunnicutt[4], 89, Heflin, and Mrs. Millie Junior[5], Steadman, Ga. They were married Dec. 25, 1867[6], and he is in his ninety-fourth year and Mrs. Scott in her ninety-second year.

1. Rosa D. Scott was the daughter with whom they were making their home. She married Thomas C. Johnson in 1898. The 1930 census for Cleburne County, Alabama recorded the Johnsons living in Muscadine with three children and John and Sarah.

2. No, John did not serve in the 30th Georgia Infantry. John submitted multiple pension applications for the relief of needy Confederate soldiers to the State of Alabama throughout the 1880s and 1890s. In each one, he identified his rank as sergeant and his unit as Company I, 48th Alabama Infantry Regiment. The same rank and unit are etched on his grave marker. The sixty-second-anniversary article stated that John was wounded at the Second Battle of Manassas, which is consistent with his pension records. The 30th Georgia was not present at Second Manassas.

There was a man named William Jefferson Head (W. J., not J. W.) from Buchanan. He was an assemblyman for Haralson County and voted in favor of secession in 1861. He served as the commander of Company A of the 35th Georgia Infantry, not the 30th. While the 35th did see combat at Second Manassas, Captain Head did not. He resigned from the Confederate army in July 1862, a full month before the battle.

The 35th Georgia did have a private named John H. Scott on the rolls for Company A. However, given that our John Scott’s pension records reported a different rank and unit, it’s not certain this was the same man.

All these errors have me wondering how the newspaper reporter obtained his information. The most likely scenario is that he interviewed John and Sarah. It’s hard to understand how John could give an account of his wartime service that contradicts the testimony he gave for his pension applications. However, it’s easy to imagine that a reporter for a local paper failed to fact-check his fluff piece on a wedding anniversary. These records may be readily available online for us today, but they were much harder to obtain in 1932!

5. Millie Brown married Floyd Junior in Cleburne County in 1896. Millie died in November the year this article was published.

6. No, John and Sarah were not married on Christmas Day 1867, though this erroneous December date does explain the “late in 1867” comment from the article on their sixty-second anniversary. Here is an image of their marriage record from FamilySearch:

“In witness of a License from the Judge of the Court of Probate of Said County, I have this day celebrated the rites of matrimony between John H. Scott and Sarah J. Brown. Given under my hand this 21st day of February 1867. J. W. Wiggonton, J. P.”

Incidentally, J. W. Wiggonton was the commander of Company I, 48th Alabama Infantry.