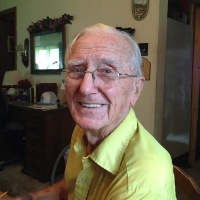 He was born in Bear Creek, Arkansas to the late Euggie Irtle and Effie Eunice Savage Bohannon.

He was a member of First Baptist Church in Morehouse, where he served as deacon for many years. He served during WW II in the United States Army Air Corps as a corporal and had owned and operated Bohannon’s T.V. and Radio repair in Morehouse, where he worked every day until 4:00 p.m. when he reported for the evening shift at Himmelberger Harrison which ended at 1:00 a.m.

On January 18, 1945, in Philadelphia, Mississippi, he married Emma Julia Green Bohannon, who preceded him in death on December 11, 2006.

He is survived by two daughters and one son-in-law, Ann and Terry McDonald of Malden, and Donna Sue Davidson and her companion, Frank Ellinger of Scott City; three brothers and two sisters-in-law, Lenord Bohannon of Fulton, Mo., Gene and Betty Bohannon, and John and Margaret Ann Bohannon all of Sikeston; three grandchildren; and five great grandchildren.

In addition to his parents and wife, he was preceded in death by one brother, Herbert “Tuffy” Bohannon.

Burial will follow in the Garden of Memories Cemetery, with full Military Honors.

My condolences to the Bohannon family.

I had the pleasure of corresponding with Alton in 2012. He’d responded to a post I made to the ARSEARCY mailing list at Rootsweb looking for information about the Copeland and Coker families. He offered to supply a copy of Danner Copeland’s obituary, and told me he knew Danner from visiting his aunt Bertha Savage at the Sikeston Convalesent Center. Danner and Bertha had been roommates there. Alton and I had one brief phone call after exchanging a couple of emails.

Alton is my third cousin once removed through the Bohannon family, our common ancestors being Daniel Bohannon (1795-1878) and Nipsy Murchison (1805-1868). Alton and I are also second cousins once removed though the Watts family, as we are both descendants of William Alexander Watts, Jr (1845-1930) and Eliza Ann Luna (1852-1926). Our relationship has been verified with Family Tree DNA’s Family Finder test.