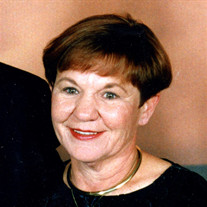 Julie was born January 9, 1943 and passed away peacefully on June 2, 2016 at San Jose Memorial Hospital after fighting through a three month stay there before the Lord called her home.

Julie married the love of her life Rusty Graham in 1969. They had 46 happy years together living in Reedley and being members of the Kings River Golf and Country Club.

In Julie’s earlier years she was an airline stewardess, worked for Metropolitan Life Insurance in San Francisco and then worked at the banks in Reedley. Her favorite job was banking and greeting everyone. She always called herself a banker woman. Julie loved to garden at her home where the beauty in everything she touched showed.

Julie & Rusty had no children of their own, however, Julie had no shortage of friends and family and loved all their children as her own.

Julie was preceded in death by her husband, Rusty Graham, her mother and father Marg and Joe Horvath and her only brother Mike Horvath, who was killed in the Vietnam War. Julie is survived by her sister-in-law Claudette and brother-in-law Tommy Graham as well as their children. Julie is also survived by her cousins, Paul Sander, Lola Sander, Mike Sander and Joseph Sander.

A graveside service will be held at Reedley Cemetery on Thursday, June 9th at 10:00 a.m.

In Julie’s memory, donations should be made to, “When I Grow Up” at the, Redeemer’s Church, 810 Parlier Avenue, Reedley, Ca 93654. It would be every much appreciated.