I transcribed this obituary from an issue of The Daily Standard of Sikeston, Missouri. I left the capitalization and spelling exactly how it appeared in the original publication. 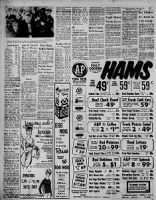 MATTHEWS – Frankie Lathum, 60, farmer on route one, died of a heart attack, shortly after being admitted to the Missouri Delta Community hospital in Sikeston Saturday[1].

Services were at 10 a.m. Monday[6] in the Jackson Funeral Chapel in Sikeston, with Don Glover, officiating.

Burial was in the Chinquatin cemetery[7] in Marshall.

4. DJ is the only child of Frankie and his first wife, Nona Elizabeth Graham.

7. A misspelling of Chinquapin Cemetery.