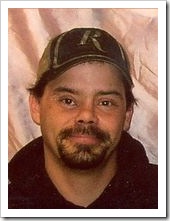 [1] The city of Pullman in Allegan County, Michigan.

[2] Randy is doubly related to me, once on each side of my family. Eddie Joe Treat is my second cousin once removed on my father’s side, being descended from William Alexander Watts, Jr. That makes Randy my third cousin on my father’s side. Randy’s mother, Geneva Stephens, is my first cousin once removed on my mother’s side, being descended from William Jasper Stephens. That makes Randy my second cousin on my mother’s side.