The 1900 United States Census was enumerated in Red River Township in June. Mancel Cebern Coker, born 22 July 1872, was living on a farm in Red River with four of his sisters and a nephew.

California E. Copeland, née Cypert, the widow of Silas Richard Copeland, cannot be found on the 1900 census. She must have been living with her three children in Red River, as she was granted a land patent there on 22 April 1899. 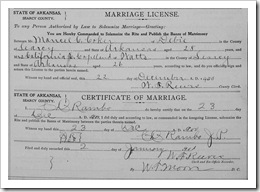 In 1902, Mancel and California celebrated the birth of their first child together, daughter Goldie Coker.

Saturday, 29 August 1903 was the birth of their second daughter, Dessie Ann Coker.

Thursday, 2 February 1905 was the birth of their first son, Cebern Perry Coker.

In Washington, D.C., the Ozark National Forest was established on Friday, 6 March 1908 by a proclamation from United States President Theodore Roosevelt. The forest covered parts of 18 counties in Arkansas, including Searcy County, from the land north of the Arkansas River. The Cokers were living on land inside the new boundaries of the forest, but pursuant to the presidential proclamation, those lands “upon which any valid settlement has been made” were excepted, and so on Monday, 27 July 1908 Mancel was granted a homestead land patent from the Federal Land Office.

At least one possibility exists for the identity of the deceased eighth child. Find A Grave has a listing for Mary B. Coker, born Thursday, 8 July 1909 and died Thursday, 22 July 1909, buried in Shady Grove Cemetery, Searcy County, Arkansas. I do not know for certain that she was the child of Mancel and California, but her birthdate would place her as their last born if indeed she was their child. Furthermore, Danner’s obituary supports that the deceased Coker child was a girl.

California lied about her age, making herself 10 years younger.

Mancel, Virgie and William had “home farmer” given as their occupations.

California E. Coker, née Cypert, died sometime in 1911 at the approximate age of 39. She was interred at Shady Grove Cemetery in Searcy County, Arkansas.

By June 1917, William Martin Copeland had moved to Drumright, Oklahoma where he worked as a pipefitter at Tidal Gas Plant #1. On Tuesday, 5 June 1917, he registered for the draft in Drumright, and later served as a Private First Class in the United States Army during the First World War.

On Thursday, 12 February 1920, census enumerator Fredrick Houghton visited the Cokers, who by then owned a farm in Shady Grove Township. Mr. Houghton recorded the widower Mancel Coker, age 47, with the occupation of farmer. Mancel’s boys Cebern and Paul were recorded, ages 14 and 12 respectively, with no occupation. The boys had both attended school and could read and write English.

Mancel Cebern Coker died on Tuesday, 4 May 1920 at the age of 47. He was interred at Shady Grove Cemetery, Searcy County, Arkansas.

I found several spelling variations for Mancel Coker: “Mancel” (marriage record, land patent and 1910 census), “Mancil” (1920 census), “Mansel” (Find A Grave and 1900 census), “Mansul” (Arkansas Death Index). One spelling variation was more common than the rest, so I’ve chosen to spell it “Mancel” in my family tree and throughout this article. I also chose to use the same spelling for both Mancel’s middle name and his eldest son’s (and a grandson’s) first name: “Cebern”.

There appears to be some discrepancies with the birth and death dates recorded at Find A Grave for Mancel Coker. His birth year is given as 1874 there, but the math doesn’t work with his age of 47 given on the 1920 census. The 1900 census recorded his birthdate as July 1872. If we assume correct the 22nd day of July, as given at Find A Grave, then a birthdate of 22 July 1872 works perfectly to make Mancel 47 years old on the census date of 12 February 1920. An 1872 birth year is also consistent with his age of 37 on the 1910 census, and his age of 28 at his marriage in December 1900. Thus, the 1874 birth year at Find A Grave must be wrong.

Mancel’s death date also appears to be wrong at Find A Grave. The Arkansas Death Index recorded it as 4 May 1920, while Find A Grave reported it as 21 May 1920.

Dessie Ann Coker was recorded as “Arkie” on the 1910 census and as “Dessie Ann” in her obituary. I suspect, though haven’t yet been able to confirm, that her given name was Arkadelphia, after her aunt. That would explain both “Arkie” in 1910, and “Dessie” if we accept it as a variation of “Delphia.”