Silas Richard Copeland was born on Friday, 10 February 1871 in Griggs Township, Van Buren County, Arkansas. He was the son of Burgess M. Copeland.

California E. Cypert was born circa 1872 in Arkansas. She was the daughter of William and Asenath Cypert.

On Monday, 15 August 1892, Silas Richard Copeland, age 21, of Marshall in the county of Searcy, married California E. Cypert, age 20, of the county of Van Buren. The marriage was performed in Van Buren County by judge J. H. Fraser and recorded by county clerk  J. B. Thompson. Security on the marriage bond was Wm. Moody.

Wednesday, 9 May 1894, their daughter Virgie Viola Copeland was born.

Silas Richard Copeland died in Searcy County on Friday, 30 April 1897, at the age of 26. He was interred at Marshall Cemetery in the city of Marshall, Searcy County. At the time, California was approximately five months pregnant.

Monday, 23 August 1897, the baby girl Silas Danner Copeland was born. She never knew her daddy, but was apparently named for him. 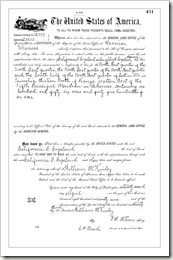 I have not been able to find California and the children on the 1900 census for Searcy County, Arkansas. She was granted a land patent only a year before the census, so I think it unlikely she would have been living elsewhere. It appears that the family was simply not enumerated.

In late 1900, California would remarry. That union shall be covered in a future article.