I came across the following obituary and “card of thanks” in the genealogy section of the Searcy County Library.  It was originally published in the Marshall Republican, 3 May 1946:

John Henry Graham, age 75, died at his home near Rambo, Searcy County, Wednesday, April 24.  He was a well known farmer of Watts community.  In his early days he joined the Free Will Baptist Church, and lived a Christian life.

He was married to Mary M. Bohannon on August 8, 1889.  She departed this life September 21, 1944.  To this union 10 children were born, seven of whom survive.  They are:  Jesse Graham, Dan Graham, and Mrs. Nona Lathum, all of Watts;  Mrs. Enissy Collins of Greenbriar, Ark.,  Jasper Graham of Morley, Mo.,  Mrs. Emma Mainord of Purcell, Okla.,  and Mrs. Stella Martin of Mt. Judea, Ark.  Surviving also are two sisters, Elisan Watts and Minnie Melton, addresses unknown;  28 grandchildren and 13 great-grandchildren.

Funeral services were held in the home of Watts, Thursday, April 25, at 10 a.m. conducted by Rev. W. L. Leach, pastor of the First Baptist Church of Marshall, and burial was in the Shady Grove Cemetery with the Coffman Funeral Home of Marshall in charge.

We, the Graham family, all wish to thank each and every one for their kindness and care through the short illness and death of our father and grandfather, John Henry Graham.  Also for the nice floral offerings – THE GRAHAMS.

The date of John’s marriage to Tildy is incorrectly listed as 8 August 1889.  According to the scan of the original marriage document available at FamilySearch.org, they were married on 3 October 1889. 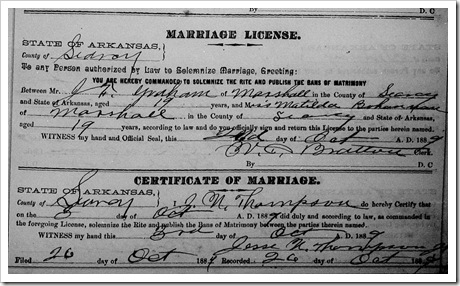