The seventh child and fourth daughter of John and Tildy Graham was born on 16 February 1902 in Red River Township, Searcy County, Arkansas, and her name was Emma Dorothy Graham.

Emma was eight years old when the 1910 census was enumerated in Red River.  She was living on the family farm with her parents and seven siblings. The census recorded that she had not attended school.  The fields on the census form to note whether she could read or write were left blank, but for her older siblings it was noted that they could do neither, so therefore it’s reasonable to assume the same of Emma at that time.

On the 1920 census, Emma was age 18 and single, still living with the family on the farm in Red River with her parents, sisters Stella and Nona, and brother Daniel.  By this time she had attended school and was able to read, write and speak English.

Elsewhere and elsewhen in Arkansas, William Earl Mainord had been born on 28 February 1903.  In 1920, Earl was 17 years old and residing in Bear Creek Township on the farm of Walter McClung and his wife Bessie, who employed Earl as a hired hand. 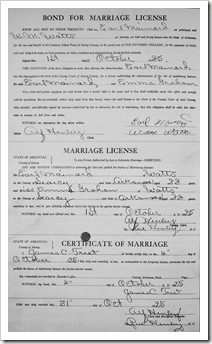 On 1 October 1925, Earl, then age 22, paid a $100 bond for a license to marry Emma, also 22.  W. M. Watts (possibly William Marley Watts) signed as security on the bond.  Watts, an unincorporated populated place in Searcy County, was given as the residence for both Earl and Emma.  On 4 October 1925, Justice of the Peace James C. Treat conducted the marriage ceremony.

Circa 1928, Earl and Emma celebrated the birth of their first son Wilber John Mainord.

On 20 February 1930, their second son Troy Clyde Mainord was born in Searcy County.

On the 1930 census, Earl was recorded as “William E Mainord” and was renting a farm in Red River Township.  Living on the farm with him was Emma and their two sons, Wilber John and Troy Clyde Mainord.

Some time after 1930, Earl and Emma had two more children:  another son named Carrell Mainord and a daughter named Earlene Mainord.

Emma Dorothy (Graham) Mainord died at the age of 84 in January 1987 in the city of Purcell, McClain County, Oklahoma, USA.

William Earl Mainord died at the age of 87 in February 1991 in Oklahoma.

Their son Troy Clyde Mainord died at the age of 69 on 6 April 1999 in Purcell, Oklahoma.  He is interred at Hillside Cemetery in Purcell.

Emma had the following name variations:  “Emma D” on the 1920 census;  “Emma Graham” on her marriage documents;  “Emma Dorothy” in the Grimes Family Tree.

Earl had the following name variations:  “Earl Mainard” on the marriage documents;  “Mainord, Earl” on the 1920 census;  “Mainard, William E” on the 1930 census;  “Earl E Mainord” in the Social Security Death Index; “William Eli ‘Earl’ Mainord” in both the Holland Family Tree and the Maynard Family Tree.  I’ve seen no source for “Eli” as Earl’s middle name other than those trees.  I’ve recorded him as William Earl Mainord in my family tree.

Where are Emma and Earl interred?  It’s possible that Emma and Earl are interred at Hillside Cemetery with their son Troy, but at this time I have no confirmation of that.

What are the exact dates of birth for Wilbur, Carrell and Earlene?